As investors, we might require the startups to bootstrap their MVP or generate customer traction before we can invest. Though the risk remains high and we need extended due diligence to validate the entrepreneur’s integrity and capacity to execute his/her plan. If the startup is able to attract capital, the competition is getting tough as there are more investors than good projects in which we can invest.

After the deal is closed, we are back in reality and we see often a lack of experience that leads to bad execution. Like many of us, we believe in “it’s not about the idea, but all about the execution” so as an investor and adviser we try to put the startup in touch with good talent and people from our network to push them forward. Is that enough though?

That’s where Startup Studio can play a big role. At Make it we have helped over 200 startups in their “lack of execution”. We have observed the following:

Entrepreneurs are too product oriented. Instead of trying to bring that value to their customers in any way they can as a mean to validate their idea, they hide behind their technology saying “I need this extra feature before I can sell”.

So we made an experiment. We tested 70 projects for which we tried to generate customer traction as a mean to validate the project. 32 of them succeeded (so we were able to generate leads), but we only invested in 4. Why? Only 4 entrepreneurs out of the 32 had the right mindset to get in touch with their leads and push hard to deliver that value they promised them. Our experiment concluded that we were able to:

2) test the ability to execute and test the mindset of the entrepreneur.

Since then, our Startup Studio has developed a fail-fast-and-cheap methodology to filter out bad ideas and bad entrepreneurs to only keep the good combo of entrepreneur and idea. We actually invest $15K per idea to execute our methodology which gives us access to a high-quality pipeline of projects in which we have the opportunity to be the first investors as we already have a “foot in the door”.

Originally, the three founders, all in possession of a master’s degree in software engineering, wanted to help startups build their digital solution. Although the three founders are Belgian, they met in New York City working for a local tech company. When they got back to Belgium, they had already one client: the company they worked for in NYC.

Since the beginning, every decision or strategic move, whether it’s investing, recruiting, working with a client or accepting a meeting, has been towards one and one goal only: “Be better at building impactful startups”.

For the first 4 years, Make it and its team had been working with over 200 startups achieving hard skills in building digital products composed of either software (mobile or cloud applications) and/or electronic devices (hardware/Internet of Things). It has also developed 5 startups from scratch to gain entrepreneurial experience.

Later, Make it decided to go one step further in its will to build startups efficiently and nimbly: further expand its capabilities around Hardware and IoT by having a small scale factory to quickly prototype and iterate on their product creations.

For its 5th anniversary Make it decided to make a strategic move towards the USA. Belgium is an amazing test market containing different cultures and languages. But it’s a small market with only 10 million inhabitants. We aspire to bring our startups to bigger markets. Los Angeles only has 20 million people, with the same language and legislation, and with a growing startup scene. That’s where they decided to plant their first foreign office.

By working for startups and by building our own startups for the first 4 years we have developed skills and a particular mindset and methodology to accelerate innovation and entrepreneurship. The conclusion of our past experiences can be explained by the following: An entrepreneur that has never launched a company before falls in love with his/her product before making sure that her project actually fulfills the need of a customer. (S)he starts developing a whole solution that is usually expensive. Figuring out after spending a few months on her project and having spent a great amount of money that the customer doesn’t really need this product or service nor wants to pay for it.

Make it’s founders have experienced this “failure” as well and asked themselves: “There must be a way of validating the need of the customer before building and investing in a whole solution.”

Since then, they have invented a whole process to ensure fast failing as a way to bring the project to a higher maturity, therefore, increasing the chances of success. The process is as follows:

Test it — An idea emerges from inside the startup studio, or from an external entrepreneur. The question that needs to be answered during this phase is: “How can I bring that value to my customer with the minimal effort”. Whether it’s profitable or not is not relevant at this point, we just have to focus on generating customer traction to make sure we are actually working on a problem worth solving, and for which the customer is ready to pay. This first phase should answer the following questions:

Shape it — If the Test it phase showed promising results, we can think about the solution that should be built: the way it’s going to look like, the features that need to be built, the way the user is experiencing the app/our service. It also defines the main technical choices, shaping the end-product. The deliverables of this phase is a feasibility study, a specification dossier, a budget and a timeline to build the chosen solution.

Fund it — After having successfully generated customer traction and after having defined what needs to be built, the time it’s going to take and the budget that is required, it’s time to put this into a pitch deck to convince Business Angels and/or funds to invest in the project. Make it has partnered up with multiple investor organizations that recognize the added value in investing very early in a project where the most important assumptions have been validated.

Build it — Now that the startup has proper funding, the team can focus on building the MVP (Minimum Viable Product) and start delivering the solution to a bigger amount of customers.

Grow it — Value is being brought to customers, the product is being iterated over and over again to bring more and more value to the customers with a continuously improved user experience. Now it’s time to grow and multiply the customer base and make the business more scalable to ensure growth. How does that work? We measure the whole funnel from acquisition, activation, and conversion to retention and advocacy to find the bottlenecks and iterate over and over again with a methodical and pragmatic approach.

Our team made of 25 coworkers are organized around those phases in order to execute in a very efficient way. As we say in our offices: “It’s not about the ideas, but all about execution”. We thrive to be the best at executing the process in order to reduce the overall risk of launching and growing a project.

The team behind Make it 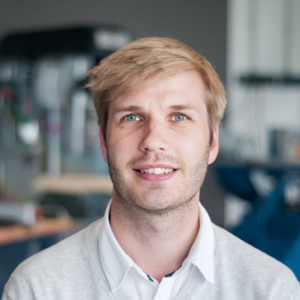 Since very young, Alexis tests his ideas on the internet. His first success was at the age of 14 after he developed and sold his first e-commerce.

After obtaining his master’s degree in biomedical engineering, Alexis moves to New York City to work for a tech startup, he grows from software developer to CTO in less than a year.

When he comes back to Belgium, he decides to use his entrepreneurial experience to launch a startup studio Make it with the ambition of creating a “startup machine” that can convert ideas into scalable ventures. In less than 3 years, he co-builds 4 startups that are still growing today.

Later he moves to the USA again to expand his startup studio model which he is convinced is the way to co-build startups, reduce risks, accelerate innovation and build employment. 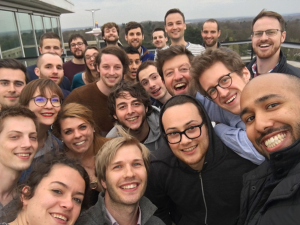 Learn more about Alexis and Make it